CLAMOR FOR THE FREEDOM OF ANDREW BRUNSON (by Pablo R. Bedrossian)

“Do you know what his greatest fear is? It’s not torture. It’s not the fact that he isn’t allowed to leave his cell … His greatest fear is that he’ll be forgotten.” Words from Kristina Arriaga, vice president of the International Religious Freedom Commission of the United States. She was the only person who could talk to Andrew Brunson, in addition to his wife and lawyer.

It’s not about those types of news that run through social networks without truth or generate chains six months after they have been resolved. It’s a case duly documented and known. The facts can be found in prestigious and massive media such as the BBC, Newsweek, CNN and USA Today.

Andrew Brunson is a Presbyterian pastor, originally from North Carolina, United States, married and a father of three children. He lived in Izmir, Turkey (in English, Smyrna) for 23 years, and shepherded a small church attended by about 25 people. He was arrested and imprisoned in October 2016 on charges of terrorism. At the time of writing this article, 15 months later, he remains in captivity with two additional charges: espionage and attempt to overthrow the government. The basis for such an accusation? According to the Turkish authorities, statements of a witness protected by an undisclosed identity.

Many will remember the failed coup d’état organized in mid-2016 by groups of the Turkish army with the purpose of overthrowing President Recep Tayyip Erdoğan. The government quickly neutralized the revolt and impeached Fethullah Gülen, a moderate Islamic cleric exiled in the United States, as the instigator of the uprising, something categorically denied by his closest circle and institutions under his influence. Erdoğan and Gülen had a good relationship until 2013, when the current president, being the country’s prime minister, accused the Muslim preacher of being the intellectual author of the allegations of corruption against his government. From there they became enemies.

Because of the attempted coup d’état, the Turkish government detained thousands of people, both military and civilians, including opponents, journalists, professors, scientists and intellectuals. Pastor Andrew Brunson was among them. He had gone voluntarily with his wife Norine to a summons issued by the authorities, thinking that it was referring to a procedure of his residence, but at their arrival they were both detained. They were accused of attacking national security, which is the same as terrorism. His wife was released 13 days later, but Brunson is still in prison.

The most important/relevant thing is that there is no concrete evidence against him. He has had excellent behavior for over two decades in Turkey.  It only appears as the testimony of a person whose identity is suggestively in reserve appears, whose statements have been changing.

THEN, WHY IS HE IN PRISON?

Why is there so much cruelty against Andrew Brunson? Everything seems to indicate that it’s due to his nationality and faith. President Erdoğan, thanks to a decree, was authorized to exchange foreigners detained in his nation for a few months, by Turks imprisoned in other countries, when it comes to issues of national security. Shortly after, the suggestion was made by the Turkish president himself, to exchange Andrew Brunson for the Muslim cleric, Fetullah Gülen, who lives in freedom in the United States.

Many people find the obvious reason of why this pastor was imprisoned: they used him as a hostage to force a swap.

Many people find obvious why the impeccable pastor was imprisoned: they used him as a hostage to force the exchange. Erdogan declared “Give us back our pastor, they say. You also have a pastor (in reference to Gülen), give it to us. Then, we will judge (Brunson) and we will give it to you … The pastor that we have is being prosecuted. Not yours; He lives in Pennsylvania. They can deliver it easily. You can deliver it immediately.”

“Please, do not leave me here in prison,” Andrew Brunson has begged. 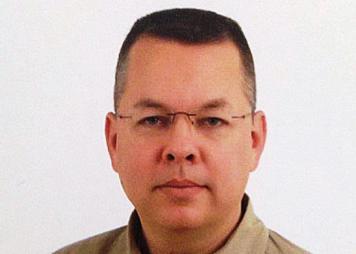 “Please, do not leave me here in prison,” said Andrew Brunson, who is confined with 17 others accused of participating in the coup plot, from a cell from which he cannot leave. He’s only authorized to receive visits from his wife and his lawyer once a week, communicating with them through a screen. That’s his only way out of the cell, since he doesn’t even have permission to eat out of it.

He has also written “Will the Turkish government continue stubbornly to keep a US citizen as a political prisoner without suffering consequences? Even though I have a proven public record as a pastor of the church, they accuse me of being a member of an Islamist terrorist group.”

Why such a cruelty against Andrew Brunson? Everything seems to indicate that it’s due to his nationality and his faith.

The United States has made efforts in favor of the Presbyterian pastor without success. For experts who are familiar with the way the Turkish government proceeds, their detention is a blackmail to the US government, in order to force the arrest and extradition of Gülen.

We believe that what happened with Pastor Andrew Brunson is a very serious violation of human rights and his deprivation of liberty is an act of complete injustice. Punishing an innocent person for political ends discredits any government and turns it into a dictatorship.

Punishing an innocent to achieve political ends discredits any government and turn it into a dictatorship.

Therefore, we invite everyone to take three actions in favor of Andrew Brunson: to cry out for his freedom, to spread his story and join us in prayer for him and his family, in moments of great adversity.

On October 12, 2018, today, the judge ordered the release of pastor Andrew Brunson, because he considered that he had already served his sentence.

“The effective prayer of the righteous can do much.” (The Bible)

I am especially grateful to Conexión Oriental, whose Facebook page is https://www.facebook.com/cnxoriental for presenting the case of Andrew Brunson and contributing information to this note. Those who want to can join their page and know what happens with Christians in the East.

NOTE: I share here some interesting articles about Andrew Brunson: